BYU vs. UCF and Week 4 Preview

BYU vs. UCF and Week 4 Preview

BYU fans today are deciding if they’ll make the drive through Friday traffic to Provo or rush home on the West Coast to catch BYU’s 6:00 mnt. kick-off against the University of Central Florida on ESPN. After last week’s embarrassment, Cougar fans are so humiliated; they badly want to just swear off the team. They can’t though. They are hooked. And they deserve credit for being so loyal.

There may not be 63,000 people in the seats tonight but fans will be there in force. Cougar fans, the one thing you still have over Utah is that you show up to games in huge numbers. When Utah is down, their attendance gets real spotty, and their stadium holds 20,000 fewer to begin with. Again though, that’s all you have on the Utes these days. Gordon Monson of The Salt Lake Tribune wrote a great column earlier this week spelling out how big the gap in the rivalry is these days.
Monson: Utah football is better than BYU, and it’s not even close

Back to today’s BYU game though. We’ll see if the stadium actually looks like this again tonight: 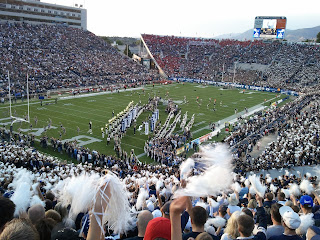 As for the game: UCF is 2-1 and beat Boston College 30-3. BC is 0-3 though and lost to Duke last week. Central Florida also lost last week 17-10 to an inferior opponent, FIU. Central Florida has a highly ranked defense but I don’t quite buy in to the hype yet. For a little different flavor, check out this preview by Iliana Limón from the home town, Orlando Sentinel on tonight’s match-up.


As for the anemic BYU offense –
BYU really misses someone like Harvey Unga. Yes, I know he is 2 years removed from his time at BYU. However, this pro-style, play-action pass offense Brandon Doman is trying to run would certainly work better with a player like Unga. He used to absolutely punish defenses. He was a big reason the tight ends at BYU were able to run wild through the middle of the field. Opposing linebackers and defensive backs were always keying on Unga and taking punishment from him. This left a lot of guys open and able to get yards after the catch as well. You could make the argument that Harvey Unga was more valuable than Max Hall during some of those 10 win seasons. (By the way, don’t those four, 10-win seasons in a row seem like such a long time ago?)

Again, if your offense is predicated upon the play action, people need to actually respect the run. Right now, BYU’s run game is totally non existent. The Cougars are averaging 48 rushing yards per game and an earth shattering 1.9 yards per carry. That is laughable.

I think the best running option on the team is Josh “Juice” Qeuzada. He has been banged up and was not really 100% coming out of fall camp. When he is right though, I believe he is the most talented running back on the roster, and the most punishing. He seems to be the best option to wear down opposing defenses and eventually break off those 15-30 yard runs like Harvey used to.

Why BYU continues to make JJ Di Luigi their feature back is beyond me. He is not going to wear anyone down. He is a scat back and a great receiving option out of the back field, but that’s it. They rely on him way too much. And he does not fit the mold of what Doman appears to be trying to accomplish on offense. Bryan Kariya, with a bigger body and somewhat of a fullback running style, would wear the opposition down more than Di Luigi. Remember back to the Oklahoma game 2 years ago. Kariya’s tough running is what kept them in that game.

Let’s hope the Cougs can bump up that 1.9 yards per carry average tonight. That will hopefully allow the receivers to get open a bit more this evening and take some pressure off Jake Heaps.

Utah is of course off this week. They will host Washington next Saturday evening in their first ever Pac-12 home game. It should be a fantastic atmosphere. They are flying high after demolishing BYU last week. You’ve got to think though that Kyle Whittingham knows his squad is not really 44 points better than BYU and they still have much to improve upon. The Utes will be locked and loaded.

Finally, Boise State plays Tulsa tomorrow. Before the year, I thought Tulsa would be one of their better games. However, Tulsa has given up 47 and 59 points in losses to Oklahoma and Oklahoma State in 2 of their first 3 games. It will be interesting to see if Boise State can handle them as easily. It looks as if TCU is getting things straightened out after their opening loss to Baylor. TCU’s resurgence should set up a huge game between Boise State and TCU later this year.

BYU in a Super Conference?
Realistic Opportunity for BYU to Join the Big 12