Sam Merrill and Neemias Queta – Aggie Legends – But Not Done Yet 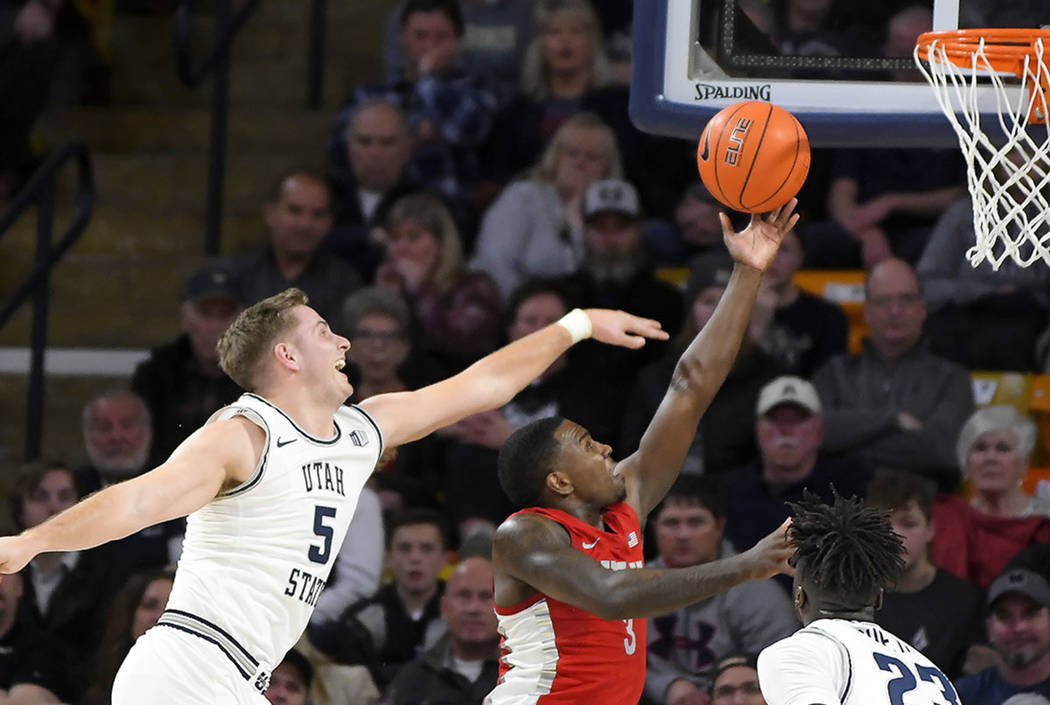 Sam Merrill and Neemias Queta – Aggie Legends – But Not Done Yet

“Winning team, losing team, winning team, losing team!” The epic chant rattled off the walls of the Spectrum last Saturday night, solidifying a big conference win for Utah State over Boise St. and sending the crowd into a frenzy. On a night where we celebrated Aggie legends of the past – Wayne Estes, Ladell Anderson – among others, we were able to witness the legends of the present – Sam Merrill and Neemias Queta- dawn the blue “State” across their jerseys and lead the team to victory.

In February of his senior year, Merrill is on the last leg of his illustrious college career. The sharp-shooting captain is 4 points away from eclipsing the 2,000 points mark. (and 6 points away from surpassing Estes as the third leading scorer). But his skills go beyond just his shooting. The 2018 Mountain West player of the year’s ability to defend opposing teams best guards, his leadership on the court, and a fierce competitive drive have made him a true star.

By the end of his sophomore year, Merrill had already proven himself as the Aggies go-to player, but in order to push this team over the top, they had to feel in some holes. Craig Smith was hired in the summer of 2018 as the new head coach for the Aggies, and one of his first orders of business was bringing in a 7’1 lanky kid from Portugal – Neemais Queta.

Queta, the 2018 defensive player of the year in the Mountain West, who is likely to go pro after this season, has become the perfect complement to Sam Merrill, ala Rudy Gobert to Donavan Mitchell on the Utah Jazz. His stifling defense, whimsical offensive abilities, and giant heart have given this team a devastating one-two punch. Last year, the dynamic duo led Utah State to a conference championship and an NCAA Tournament appearance, and this year is keeping them in the tournament conversation. Queta has been hampered by a knee injury this season, but has been healthy for several games now, and is looking as good as ever.

So that is what we have. Two guys that embody what Utah State is all about. Merrill, the low-key, humble guy that has a drive to win that is unmatchable. And Queta, who treats everyone he meets off the court like a million bucks, but will swat the soul out of anyone who tests him on the court. Regardless of what happens down the stretch this year, Merrill and Queta will be revered in Aggies history forever.

But their story is not yet over.

Teetering on the bubble of making the tournament, these last 5 regular-season games for the Aggies are critical. Getting the win at Colorado St. tonight, taking care of business against the last four teams, then showing well at the conference tournament, is likely what it will take to get into the dance. But with these two guys on our side, we are fully capable. We have seen it happen this year. Sam leading the team to epic wins against LSU and Florida. Queta putting the team on his back against UNLV and Boise to secure vital conference victories.

The circumstances may be difficult, but this is what you want to see. One team, a great team, led by two great players, who have this final opportunity to do something special together. To make the NCAA Tournament, and to lead Utah State to their first tournament win since 2001. Their backs may be against the wall, but they control their own destiny, and that’s all you could ask for really. So savor these last games, however many there are left, of Sam Merrill and Neemais Queta representing the Aggie blue and fighting White. Because they may just do something special, and make our squad the Winning Team, just like the crowd chanted Saturday night.

Previewing the Utah College Football Quinfecta
Who Is BYU Football Going to Play This Fall?