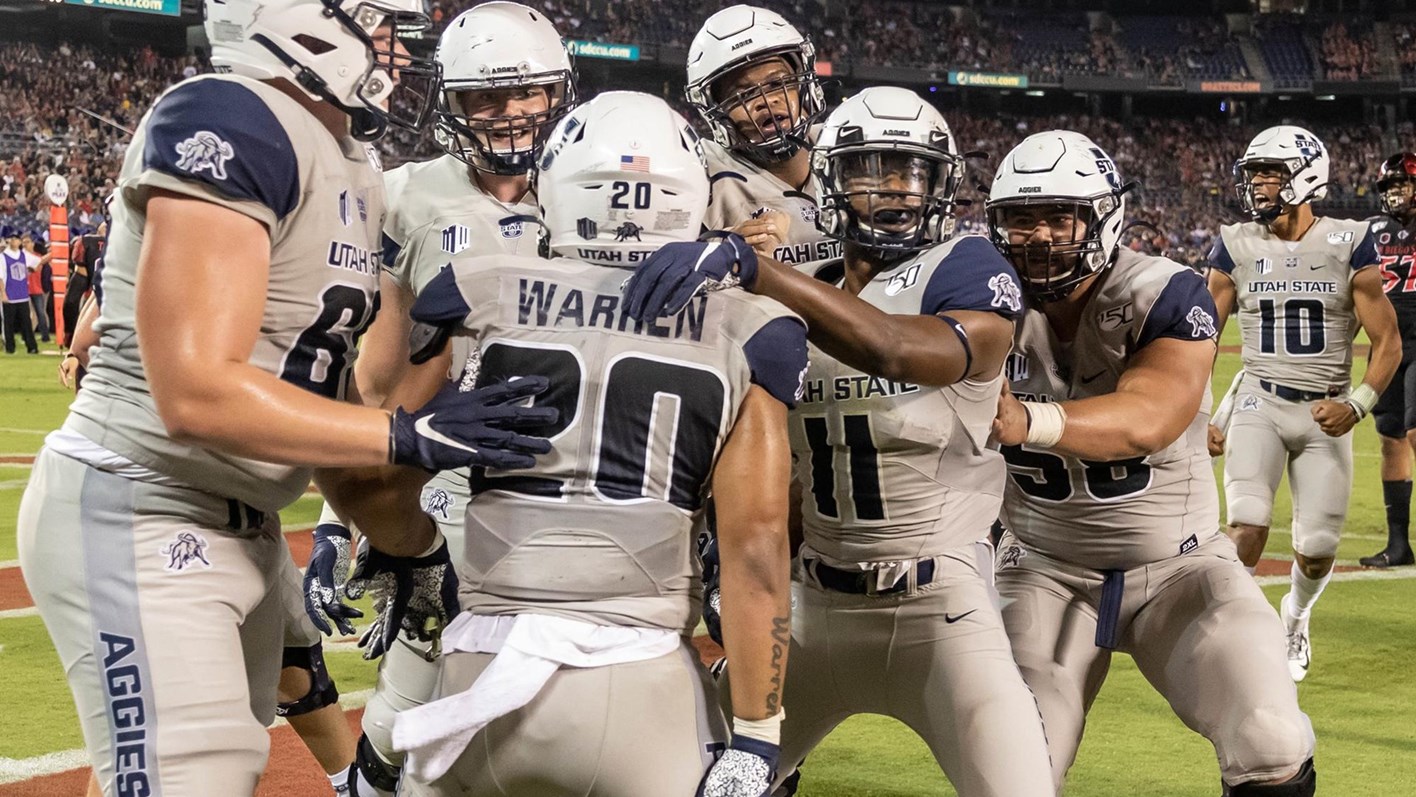 Big-time win for the Aggies Saturday night. They beat San Diego St. for the first time since being in the Mountain West and started conference play with a solid road victory. Here are some takeaways from the game, and the season in general:

Anxiety Aggies: The gray-cladded Utah State Aggies once again found a way to make things interesting when it seemed to be well in hand late into the game. It reminded me of the Air Force game last year how we were dominating when all of the sudden Air Force gets some fluke touchdowns and its a one-possession game. This one was a little bit scarier, because the Aztecs had the ball with time and a chance to win, and there was some serious PTSD from the Wake Forest game. Luckily the defense was able to get that final stop and come out of there with the win.

But I still have some serious concerns about our performance in tight games. Can the team just step up and look confident at the end of the game? If our 4th quarter performance is turning blow-out games into sudden nail -biters, what will happen when we’re actually in a close game? How will things turn out when we are tied with Fresno with 5 minutes left, or down 3 against Boise needing a game-saving field-goal? Sometimes it just seems like the moment is a little too big for these guys, and they have yet to prove that they can perform well under pressure.

Offense: One of my biggest concerns entering the season was how the offense was going to fill the shoes of Darwin Thompson and stay consistent in the run game. While Gerald Bright has been and will continue to be a huge asset for the offense, Jaylen Warren, the transfer out of Snow College, has become the man. His speed and agility has stood out and made him a solidified play-maker. Saturday night vs. SDSU, he was put to the test against a stout defense but managed to make plays when he needed to, rushing for 74 yards on 17 carries and bull-charging his way into the end zone for the solo offensive TD of the night.

Warren’s abilities makes the opposing team respect the run game, which will evidently give Jordan Love more room to operate. And operate he did, with Jordan having an efficient 30 for 47 with 293 yards passing and 0 interceptions. I am not overly worried about the points on the scoreboard (with SDSU actually having a pretty good defense) but would like to see the Aggies finish more drives in the endzone instead of just settling for 3. All-American Savon Scarver and grad transfer from Utah, Siaosi Mariner, seem to be Love’s most reliable targets. This is a prolific offense, led by a generational QB talent, so be sure to treasure the moment every time these kids walk on the field.

Defense: The Aggies defense had a strong performance (not as good as Weber State`s haha) and held a vanilla SDSU offense to just three points in 3 quarters. USU`s front 7, led by David Woodward and Tipa Galeia, were impressive, containing the run game quite well, and getting the defense off the field. Even the secondary was playing well initially, with safety Shaq Bond having a momentum-changing interception.  Having timely turnovers was key in the success last season, and is proving to be a strength of the Aggies once again.

But towards the end of the game, the undermanned secondary got exposed. On 4th and 15 with 10 minutes left in the 4th, the Aggies (with 8 men in the backfield) inexplicitly forgot about Wide Reciever Kobe Smith, who ended up wide open in the end-zone for the touchdown. Then the following drive on 4th down again, with 5 minutes left in the game, Aztec receiver Isiah Richardson caught the ball right at the sticks, and after a missed tackle by DB Cameron Haney and some bad reads by the safeties, found himself in the endzone. This overall performance by the secondary was enough to get out of San Diego with a win, but it’s looking like Joe Burrow and the LSU wide receivers are going to light us up in 2 weeks.

Small-margin for error: Boise St. is undefeated and coming off a big win Friday night verse Air Force. The schedule aligns in their favor, as they avoid UNR, Fresno St., and SDSU. Their two real conference tests until they play USU in November will be against Hawaii and Wyoming, but I get the feeling that they are not going to lose. So it’s expedient that the Aggies keep pace, so they have a chance at the division. Games against LSU and BYU will be important, but hopefully, USU will not overlook the conference game intertwined between those two. Their focus needs to be on the ultimate goal: Winning the Mountain West Conference. Additionally, with UCF’s loss to Pitt, the chase for the Group of 5 New Years six is totally up for grabs…

Up Next: Homecoming weekend comes to Logan on Saturday when the Aggies take on Colorado St. in a blue out game. Colorado St. has played pretty poorly this season, but nothing can be taken for granted, especially after last year’s game when a single step out of bounds by a Rams receiver was the only difference between a win and a loss in Fort Collins. But I fully expect the Aggies to put plenty of points on the board and secure an ever-important divisional victory.