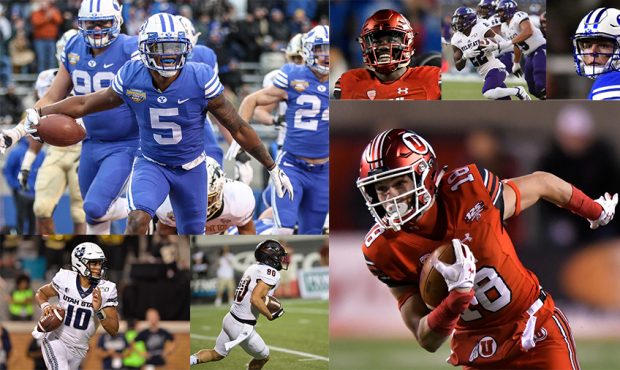 Utah St: vs. Nevada @8:15 2 weeks ago Big Blue ill-advisedly got stuck in a cage with Mike the Tiger and got thrashed around for 3 hours. But luckily they had last week off to put on some bandaids and heal some wounds and they should be ready for Nevada. The Wolf Pack come to Logan with Last Chance U quarterback Malik Henry and are hoping to ride some momentum off their win against San Jose St. last week. But the problem is that the UofN defense is awful- they probably couldn’t even guard a fire extinguisher. Love should have a field day throwing the pigskin around and USU should put plenty of points on the board and maybe, just maybe, not be so awfully terrible in the redzone. With some big games still looming for the Aggies, (Air Force, Fresno, Boise, BYU, Wyoming) it’s expedient that they win this game, and handily. Keep guys healthy and go out there and get the job done.

BYU: vs. Boise St @8:15 Ok ya so um, we got some problems in Provo. After 2 poor performances against not very good teams in Toledo and South Florida, and seemingly half of the starters out with injuries, things appear very bleak. Now a nationally ranked rival comes to town that BYU has yet to beat in the Kalani era. Do the Cougars have a fighting chance against this explosive offense with their 2nd/3rd string QB and a depleted secondary? Probably not. Kalani leads his teams with a lot of emotion, which means the highs are really high and lows are really low. Like really low. Obviously, there’s a lot of (valid) excuses for why the Cougars aren’t winning football games, (talent gap, lack of depth, administration, coaching schemes, honor code injuries etc,) but couldn’t they like, just play good football? Not necessarily beat Boise, but look like a team that plays with pride and has some grit?  We will see Saturday.

Utah: vs Arizona St.@4:00 Nothing says “big-time football” quite like an afternoon game on the Pac-12 network. But in all seriousness, this is a pretty big-time game for the Utes. They host the #17 Sun Devils, a team that always seems to give them a hard time. ASU boasts freshman QB Jayden Daniels, who can is pretty dynamic, and then some athletic wideouts that have some big-play ability. The key may be for Ute Dline’s ability to dominate in the trenches and make the rookie QB as uncomfortable as possible. The result of this game will narrow down a pretty wide-open race for the Pac-12 south, the Utes don’t control their own destiny because the University of Spoiled Children has the tiebreaker, but a 3-1 start in conference play would be a good place to be in and keep the momentum rolling.

Weber St vs Northern Arizona @2:00 Weber St. is ranked number 5 in the FCS coaches poll, and it feels as if this is the year for Jay Hill and the gang to do something special. Defense is where they hang their hat, showing up in big games against SDSU, Nevada, and Northern Iowa, but an offense, led by QB Jack Constantine, has a bit more experience this year and is proving that they can put points on the board. Northern Arizona is coming off back to back losses to fellow Big Sky schools and it does not seem like they should be much trouble for the Wildcats. Weber obviously has their sights on another Big Sky title and beyond; games against Sacramento St. and Montana down the stretch will be huge tests that will likely show how good this team really is. I’m interested to see how much longer Jay Hill will be coaching at the FCS level. Someone is going to hire him in the near future, right?

SUU vs UC Davis @6:05 The Thunderbirds of Whoville (Cedar City) are a bit of a dumpster fire this season, 1-6 on the year and giving up an average of 40 points per game. They have fallen a long way since their Big Sky title in just two years ago and things could likely just get worse. This weekend they play UC Davis, who is 3-4 on the season and looks pretty average. Maybe is the Thunderbirds force some turnovers they’ll have a fighting chance. If nothing else, it’s supposed to be sunny with a high of 64 in Cedar City Saturday, so it may be a nice evening to go watch your neighborhood college football team get steamrolled by a college you may or may not have ever heard off.