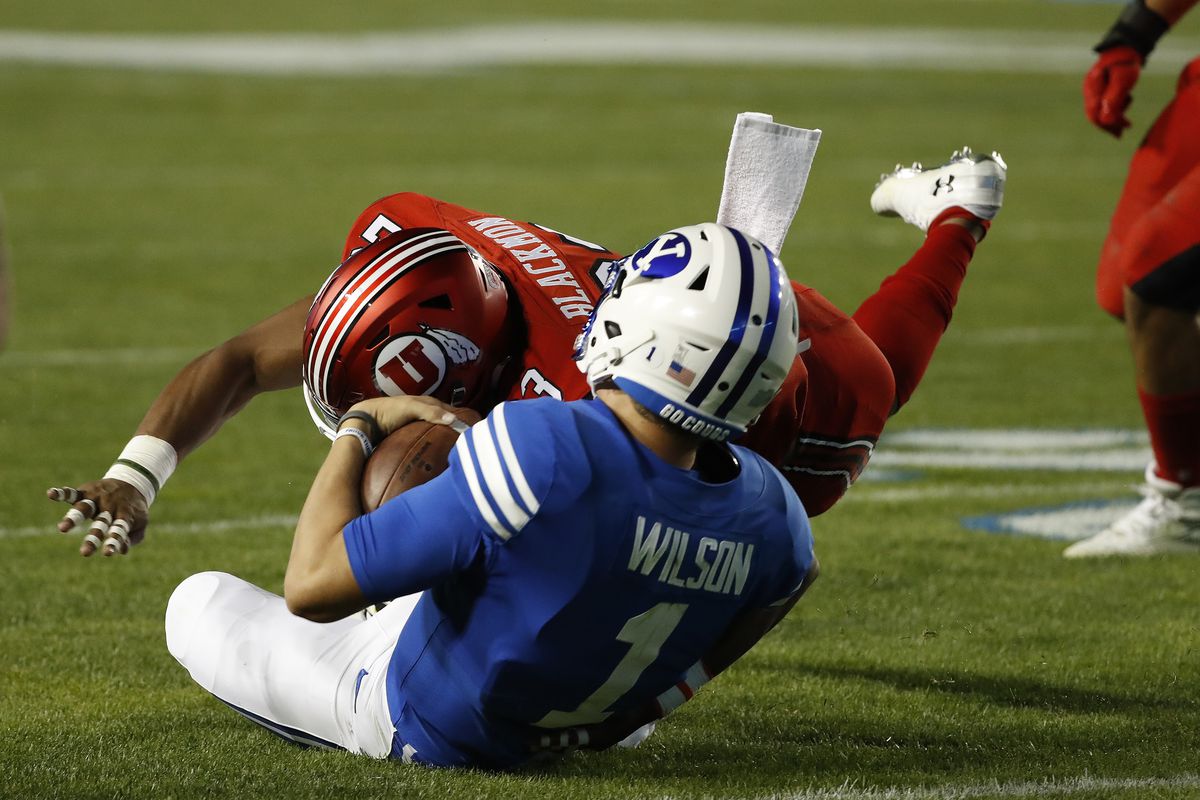 The tears of the football gods came pouring down late Thursday night, putting the game on hold and giving the majority of the disappointed fans the opportunity to call it a night with 9:00 minutes still left to play. The unexpected downpour turned out to be the only thing different about this year’s Holy War, as the #14 Utes won the season opening game over the Cougars 30-12.

Since the gut-wrenching loss in Salt Lake last November, last night’s game had been the #1 priority of the BYU football team for the entire off-season, with every practice and workout session geared towards the opener. But last night, the aspirations of the team faded away about as quickly as one can say, “beat Utah” in a post practice huddle. It was a familiar formula for the Utes, taking advantage of BYU mistakes, establishing the run game, and wearing the Cougs down in the trenches.

Everybody in the state of Utah understood that Kalani’s squad had a 0% chance of winning if they lost the turnover battle and spotted the U free points. And well, that’s exactly what happened. At about the 10 minute mark in the second quarter with the game tied 3-3, and all the momentum swinging BYU’s way, Zach Wilson tried to make something out of nothing, and gifted 6 free points to ex-Cougar Francis Bernard, on an interception. The air went out of the stadium in that moment, giving the Utes the confidence they needed and set the trajectory for another Utah victory. BYU actually played the better first half posting 196 yards of offense to Utah’s 125 and controlled the possession of the football. But the mental mistakes, failing to hand the ball off to Ty’son Williams, and the stout Utah defense kept the cougars out of the end zone and gave the Utes a 9-6 lead. Going into the half, the Cougars had fallen right into the hands of Kyle Whittingham’s game plan, for the 9th time in a row.

The Utes’ offense came out in the 3rd quarter and pretty much sealed the deal, with Zach Moss displaying his NFL-caliber running abilities, and the Utes superior depth wearing the BYU front-7 out, as they marched down the field for a touchdown to go up 16-6. The Cougar offense did a whole lot of nothing in the 3rd, and the Utes held the possession in the 3rd for 12 whole minutes, practically the entire quarter. In the 4th, things collapsed quicker than the storm clouds rolled in. The Ty’son fumble, followed by a Utah TD, then the 2nd Zach Wilson Pick-6 – took this game from a slugfest to a blowout.

The field dried up, the final 9 minutes whisked away, the Utah fans chanted “9 is here,” and I was in the stands reminiscing about what had just gone down, and what it meant for BYU. The first takeaway is this: There is a huge mental gap between the Utah and BYU players. This game was sort of a super bowl for BYU, and at times it felt as though the moment may have been a bit too big. You put so much mental and physical energy into a 3 hour football game, and you make just a handful of bad plays, and you completely blow it. The Cougars looked ready to play, but you could just sense the tension and the nerve from the team, and it translated into several mental errors on offense, missed assignments and blocks, and 3 turnovers that directly turned into 3 touchdowns for Utah.

Take away #2: Utah is a good football team. The Utes had a handful of mistakes themselves, some dropped passes and bad reads and what not, but they looked much more poised and collected. They never did anything super fancy, they never do, but the Defensive Line was stout, keeping BYU out of the end zone and pressuring Wilson into throwing the ball away, and Zach Moss looked as good as ever. He ran over guys, had speed on the edge, and really did whatever he wanted. Utah clearly has the superior depth and talent to BYU, but we already knew that. But having better talent is not a fool-proof way to win football games.

Take away #3: This game will not define BYU’s season. There were some good signs on the field and hope for the future. If you take away the 3 touchdowns off turnovers, BYU wins 12-10 haha. BYU has an established back in Ty’son Williams. He looks like he can run guys over and get through the hole. Zach Wilson may not be 100% healthy still but he will continue to develop and and make better reads. And the defense played ok. They are missing talent in the secondary and missing the presence of Bronson Kafusi and Sione Takitaki, but they were able to bash around with the Utes, and look like they could hold their own in games against Tennessee and beyond.

So the game was a huge letdown, but the great thing is: It’s over. BYU players and fans can accept it and move on. The pressure of beating the rival is gone for the rest of the season, now its just time to go and ball out.