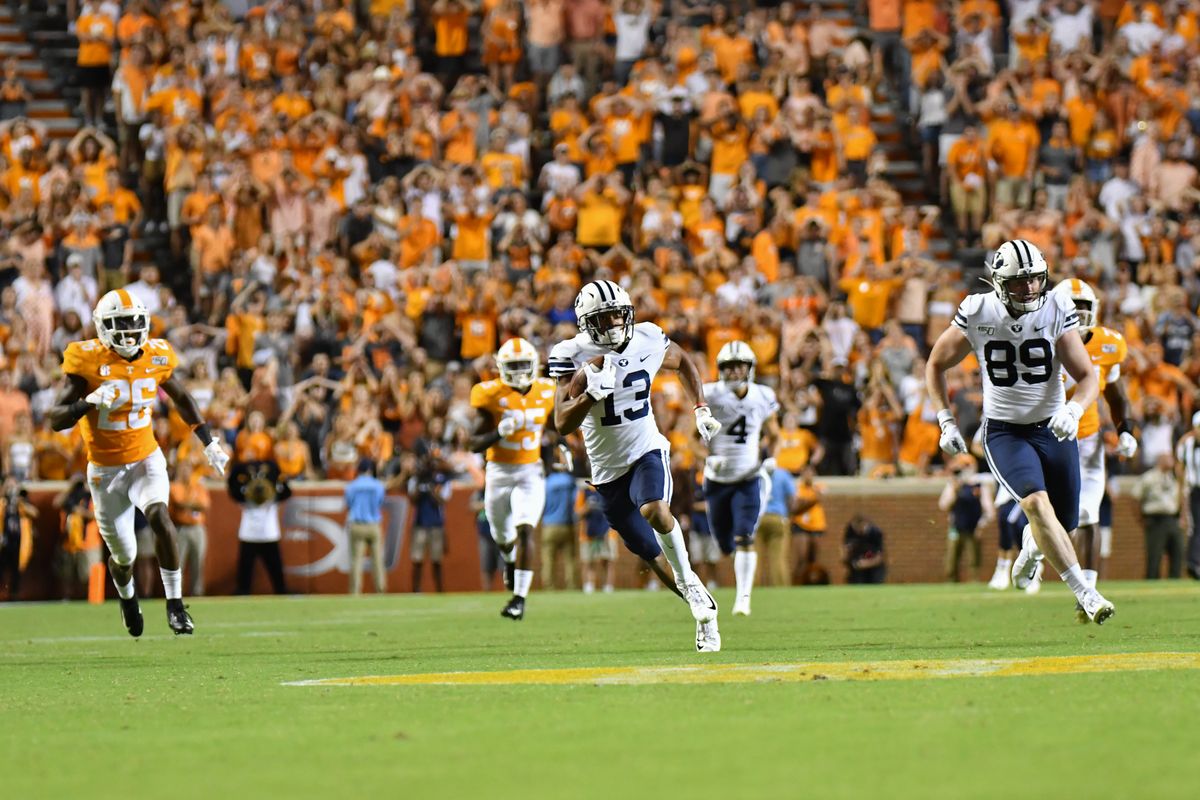 Saturdays night’s game against the Vols was an all-time classic for the Cougars, checking all the boxes for drama – a prayer heaved down the field 60 yards when all hope was lost, a field-goal that barely slips through the uprights, double OT, and a shoe being launched like a discus almost into the Tennessee River. The wild ending was fun and exciting and got Cougar Nation on their feet, and through all of it, struck a familiar tone, similar to games before it, and epitomized the life of BYU football as an independent.

The game kicked off at 7:00 P.M. Eastern on ESPN against a storied SEC program, with 12,000+ loyal BYU fans in attendance. Everything you would have dreamed of when Brigham Young announced the plans to go independent in 2010. Football was played. BYU appeared to be outmanned at points, clearly not as talented as a team that boasted 14 blue-chip recruits as starters. BYU was out rushed, had less time possession with the football, looked lackadaisical at times, and made poor decisions.

But the Royal bunch had something that Tennessee seemed to lack: a massive chip on their shoulder, the size of the Y on the Mountain. They had an animated coach in Kalani Sitake, who screamed rally cries into the air and inspired his team. They had gritty defenders in the trenches, like Khyris Tonga and Kovika Fonua, who ran over lineman and made heroic tackles. And they had men on the offensive side of the ball, who had felt the sting of disappointment far too often to go down without a fight. Micah Simon, a Wide Receiver who 7 days before, was crying in the post-game interview after a gut-wrenching 9th straight loss to his rival, and in turn had 7 catches for 127 and the game saving play. And Ty’Son Williams, who spent the majority of his career standing on the sideline, just waiting for his moment, ended up with 17 carries for 92 yards and the game winning touchdown.

These members of the team, and many more, led BYU to a clutch victory, and characterize the program as a whole. A scrappy, gutsy, strong-willed team, with a handful of players who can step up and make a play. We have seen it before. Kyle Van Noy, with the strip and the fumble recovery to defeat Ole Miss. Taysom Hill, who carried the team on his shoulder for two wins over Texas. Tanner Mangum and Mitch Mathews, who were able to connect for the miracle hail-mary at Nebraska. And Squally Canada and Corbin Kaufusi, who led the team to a victory at Camp-Randall last season.

These games were all epic, electrifying victories for the Cougars, beating big named programs and setting people into a frenzy. But they all had a common denominator: None of these teams were actually very good. 2011 Ole Miss finished 2-10. Both Texas teams finished un-ranked. 2015 Nebraska went 6-7. And 2018 Wisconsin went from #6 to falling out of the polls.

So this is who Independent BYU is. They are a good team with some good players, who can handle most Group of Five teams, be a tossup with mid tier Power 5 teams, but just don’t have the depth or talent to hang with the big boys. What will this get them? A little bit of hope, a few memorable moments, and a lot of disappointment. It could get them at best an 8-4 season with a bowl game against Wyoming – but it’s not going to get them into the Fiesta Bowl.

So how does that change? Does it need to change? Moving back into a conference? Lightening academic requirements for recruits? Putting more money into the football program? Probably. But I’m just a kid blogging in his basement, not the one making the big-time decisions. So for now, this is where things are. This season, we have a more experienced Kalani at the helm, Zach Wilson at quarterback, and a little bit more depth in the trenches. But how much is that going to move the needle? I don’t know, we’ll see. But that doesn’t mean we can’t have fun. So who cares that Tennessee is about to go 1-11 this season. Let’s just enjoy the moment – relish the victory, listen to the Greg Wrubell highlight tapes, and hope that Lisa Wilson is praying for a win Saturday vs. USC.