Those of you that are old-school Jim Rome fans might remember his classic re-set of the Pete Gillen “Leave it to Beaver” quote several years back. In a post-game press conference after losing to Duke, then Virginia head basketball coach, Pete Gillen was asked about Duke and their stellar play. His response was: “Certainly Duke is Duke. They are on TV more than Leave it to Beaver re-runs.” With kind of a New York/New England accent, Gillen styled the word Beaver somewhat and Rome made it famous by exaggerating the accented “beaver” over and over. If you’ve never heard the original clip of Gillen, here it is:

Of course the point Gillen was trying to make with the quote was that Duke rarely lost. In large part, their winning was due to the fact that their games really were on national TV almost all the time. And with that exposure they enjoyed recruiting success second to none.

As crazy as it may seem – at least as far as TV exposure goes (BYU wins nowhere near as much as Duke), BYU football is becoming the equivalent of Duke Basketball. They will play their 5th game on Friday night and it will be their fifth game televised on ESPN. Not to mention, back to back Friday night appearances. By the end of the season, if you’re just an average Joe watching random ESPN games, you will have likely seen BYU play more often than any other team. Remember, BYU has yet another Friday night game in late October against TCU. How do you think Boise State became so popular?

Compared to where they were the last several years, the Cougars have basically gone from Outer Mongolia to New York City’s Times Square. They could not be more on the map. It’s like the scene from the movie Cast Away, when Tom Hanks is finally rescued off the island. After spending 5 years scrounging, hunting and spear fishing for whatever food he could find, within just a day or two of his rescue, Hanks’ character finds himself standing in front a lavish buffet spilling over with lobster and crab legs. BYU is experiencing a similar drastic change. 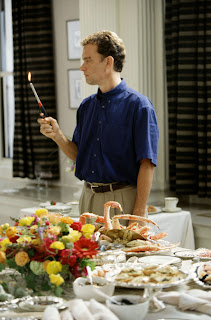 So with all this new found face time, Coaches Mendenhall and Doman better get the offense geared up or BYU’s national brand will put people to sleep early on Friday night. Not to mention, please stop humiliating the program like they did in the Utah game 2 weeks ago. Good news for the Cougies though. Supposedly the Utah game had nowhere near the viewership of last Friday’s game against UCF. Read Scott Pierce of The Salt Lake Tribune. He is a television writer.

One last TV thought on BYU……

With all the advance notice that the school would play a million times on ESPN, and with their new state of the art television studio – the best marketing campaign BYU could put together was a commercial in which Steve Young tells a large feline that he loves BYU so much he got a law degree there! Are you kidding me? Is anyone else ready to throw up if they see that spot again. The only good part of it is Jimmer stealing the ball from the large cat. And no offense to Chad Lewis, but I’m kind of wondering how BYU legend, Lavell Edwards did not make the cut.

After doing a little YouTube research I found out there is indeed a longer version of the spot that does include Lavell. It would be nice to see this one run instead:

Finally, as for the contest on Friday night – you might recall that BYU was demolished by Utah State last year. The loss officially derailed the season and led to a massive coaching shake-up. Don’t expect the same if the Cougies lose again to the Aggies because it won’t be as big a surprise. However, if BYU can get some offense going and win the game in convincing fashion, it could really get the 2011 season back on the right track.

And should that happen, don’t be surprised if Utah State head coach, Gary Anderson rattles off a 2011 version of Pete Gillen:

“Certainly BYU is BYU. They are on ESPN more than World Series of Poker re-runs!”

Latest on BYU to the Big 12
BYU vs. Utah State, Utah vs. Washington and Week 5 Review