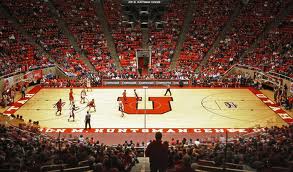 Utah Men’s basketball coach Larry Krystkowiak has apparently had enough of Jiggy Watkins violating team rules and has permanently dismissed him from the team. Watkins had already been suspended once this year. Jeff Eidenberg of Yahoo Sports has the details.

This was the right move for Coach Krsytkowiak. Losing their best player may ensure the Utes don’t win another game this year. That shouldn’t be a problem though. No one expected them to be competitive the reminder of the season, even with Watkins.

Krystkowiak had absolutely nothing to lose. He needs the team to buy into his system. Throwing a “bad apple” off the team during a 4 or 5 win season seems like a great way to get his message across without jeopardizing the long term viability of the program. Watkins was a senior and did not figure into future plans.

You often see this type of “house cleaning” when a new coach comes to town. I applaud the move and expect it will pay dividends in the long run. Who knows, you might even see the team step up their hustle and grit out a win or two to demonstrate they’re buying into Krystkowiak’s system.

BYU Road Games Not the Same
BYU Gonzaga Round 2 Preview