BYU vs. Utah and Week 2 Review

BYU vs. Utah and Week 2 Review

In preparation for the showdown between BYU andUtah, I wanted to offer up a few thoughts on the games from last week. 2 close losses, 2 totally different meanings:

In an uncharacteristic panic move, Kyle Whittingham rushed his field goal unit on to the field too quickly and it resulted in Utah having their potential game tying kick blocked. There was no reason to be in such a hurry. A lot of folks second guessed him on not throwing one more pass into the end zone or an out of bounds play. I gotta admit it would have been awesome to see them throw caution to the wind and go for a knock-out blow, and stun the elitist SC crowd and coach Lane Kiffin. However, the reality was Whittingham knew he had a very limited quarterback. Going for the tie when he did was the right call. Again, it was just rushed. The holder should have taken charge and seen that there was still plenty of time on the play clock, and gotten off a better play.

That aside, credit the Utes for their half-time adjustments. That game looked like it might get out of hand in the first half. The Utes really clamped down on defense and the offense was able to muster up a little something. In regards to theUtahoffense, if they had a solid back-up QB, I think Jordan Wynn’s starting position would be in jeopardy. He just does not seem to have it. IfUtahcan ever recruit a pure passer, they will be scary good. Their program is so well run and so full of defensive studs, they’d be a top 10-15 team with any real offensive fire power.

Bottom line: The Utes took the Pac-12 South pre-season favorite all the way to the wire on the road. A win would have been better butUtahshowed they’ll fare just fine in conference play this year. And that’s the whole point – there is still something to play for! If I’m aUtahfan, I see no reason why my team can’t compete for the South division still. Game on, season on!

That leads us to the other game we were flipping back and forth between…..

There are no “moral victory” teams on BYU’s schedule this year. Texas was indeed a big name but they aren’t as good as Oklahoma, Alabama, LSU or Boise State. BYU should have found a way to win that game. BYU needs to understand that good teams beat up on garbage teams. Good teams play well for a half. Great teams step on your throat when they have you down. Great coaches don’t get conservative in the second half and squander a lead. Great teams and Great coaches go pedal to the metal and win big games in hostile environments.

Remember back to the first half – BYU was dominating the football game so much so thatTexasfans were booing their own quarterback. It honestly looked like the Cougars might be up 24-0 by half-time. Blame Bronco, blame new offensive coordinator Brandon Doman whose play calling was bad at best, blame it on receivers that can’t get open, whatever. You just simply can’t lose that game after playing so well in the first half. You spend the entire off-season talking about “exposure” and stepping up to play better teams, and becoming a premier program – and then you go out and lose a game the way they did. After the game Bronco offered up the same excuses about “poor execution.” Call it what you want but when Texas needed a big play to win the game, they came up with a little trickeration that they “executed” perfectly. That’s what Cougar fans want to see more of. Mix it up on offense. Don’t be so predictable.

So what is the impact of this loss?
BYU is not in a conference and 2 weeks in, BYU essentially has nothing left to play for. Of course no one thought they were going to win the National Championship this year. However, midway through the first quarter as they are stomping on Texas, it’s looking like a magical season could be on the way. A big win at Texas sets them on their way to a 10 or 11 win season and possible BCS game. I guess that scenario is still technically possible, yet highly unlikely. So in 30 minutes of football on Saturday night, BYU went from a great team with a dominant defense and an up and coming QB, with the opportunity to have a special year – to a team that all but guaranteed themselves a spot in a worthless bowl against a Conference USA opponent.

Of course everyone is still revved up for the Holy War and yes the TCU game will be fun. But what is there beyond that? In a weird way, it would have almost been easier to stomach if they’d been manhandled byTexas. At that point, if you’re BYU you realize you have a ways to go still, maybe get to 8-4 on the season and at least improve upon last year. That’s not what played out though. BYU was just destroyingTexas, imposing their will and looking like a team that could do great things this year. They teased their fans into thinking this was a magical year.

So what should we expect the remainder of the season – I think BYU goes 8-4 with their eyes closed this year. They can still go 10-2 even. They are a pretty good team. It just won’t matter though after having lost to the biggest name on their schedule. And if BYU should find a way to lose toUtah, I don’t know if a win over Central Florida, revenge againstUtahState, and 4 other home cupcake wins will be enough to satisfy Cougar fans. Gary Patterson has thoroughly out-coached Bronco for the past 3 years and as I’ve said before, I expect a similar result again this year against TCU. That would put the Cougs at 9-3 with their marquee wins being over a bottom tier SEC team andHawaii. The 2011 plan called for much more excitement than that.

Again, it is still early. There is a lot of football to enjoy and the Cougars are better than last year. Thing is though, if the Cougs want to talk a big game, they need to back it up; or get into the Big-12 as soon as possible where they won’t have to walk such a fine line every year.

As for the Holy War – you figure both defenses will be tough. You’ve got to think the first team able to put 21 on the board will win it. 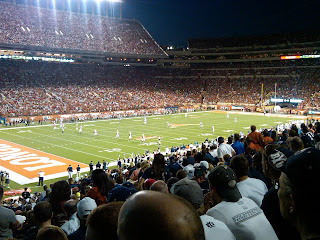