My Weekend Trip to Texas A&M

My Weekend Trip to Texas A&M

My son and I, who are both contributors to this blog, took a trip this weekend to see one of the great programs and traditions in all of college football – Texas A&M. Though the Aggies were unfortunately outplayed and lost the game to Auburn, the weekend did not disappoint.

Ironically enough, we flew in and out of Austin to get there (Houston is 30 minutes closer, but the flight times did not work for us). Upon arriving in College Station, our first stop after meeting up with my brother-in-law, his bro and a buddy, was to hit a place called The Warehouse, south of campus. Picture one of those empty, big box retail-type buildings you see turned into a Halloween store every October, but bigger. Then imagine that store stocked entirely with Texas A&M Aggie swag. And this place stays open year-round! It was quite impressive.

Friday evening we dined on some sensational BBQ from a place called C & J Barbeque. While there, none other than former Utah State Head Football Coach and shall I say legend, Matt Wells, sauntered through the same BBQ joint. These days donning Texas Tech gear, Coach Wells was in town on a bye week recruiting a kid who was playing high school ball just down the street. Coach could not have been nicer. He was delighted to be recognized as a Utah State Aggie when my son chatted him up and let him know he attends Utah State and did not miss a game last year. 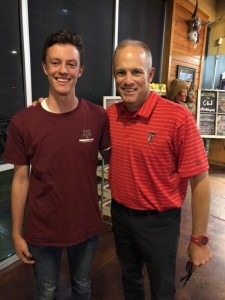 After filling up on ribs that fell off the bone and fantastic brisket, we sauntered over to the high school field my brother-in-law and his brother both attended while growing up in College Station. As we all know, high school football in Texas does not disappoint. There were huge grandstands for both the home and visiting teams. Not entirely full as we arrived at the end of the 3rd quarter of a blow-out game but it was still a great atmosphere.

After the game we made our way to the north end of town to an area known as Northgate. This place goes off. It is just north of campus and is an area comprised of restaurants and bars with kind of a huge courtyard in the middle. As you might imagine at 10:00 on Friday night in a college town, the place was revving into high gear. Since we were a rather low-key crew, we ordered a round of Diet Cokes at one such establishment and settled in to watch what turned out to be a very unexpected outcome to the Utah/USC game.

Most of the crew then rolled over to what is known as midnight yell. You probably know that Texas A&M is steeped in tradition and honor, and much of that has to do with the school’s military roots. There is also a great tradition of the crowd being “The 12th Man” on the team. There are several unique cheers and hand signals that yell leaders bark out to the student section during each game. It is a tradition for students to go to the stadium the night before to practice these cheers. It gets going around 11:30 and it drew 15,000-20,000 people the night we were there (another 80,000 showed up for the game the next day)!

I’ve attended several BYU and Utah games over the years, 4 or 5 UCLA games at the Rose Bowl (back when they were good). I’ve been to a game at South Carolina, 2 games at the University of Texas, one at Michigan and one recently in Tennessee. I can unequivocally say that Kyle Field on the campus of Texas A&M is the biggest, most impressive stadium I have ever seen. It rises up out of the ground and simply towers over everything else in town. You can literally see it from miles away due to the flat landscape. When you get up close, it is just a massive structure. The playing surfaces in most stadiums actually sit below ground level a bit. I can tell you this one does not. The edifice is gargantuan and emblematic of the immense state pride found throughout Texas and the A&M community. The football facilities surrounding the stadium are also new and gorgeous.

Game day draws thousands upon thousands of fans from the Houston and Dallas/Ft. Worth metro areas. The school does a great job turning the scene around the stadium into a day long game-day experience leading up to kick-off. Tailgaters, games, booths and food trucks are everywhere. The SEC network made A&M/Auburn their “game of the week” so there were multiple Tim Tebow sightings as well as the great Paul Finebaum. There is a huge area of grass on the east side of the stadium that is just a sea of activity.

The only caveat to all this pomp and splendor – it is hot and humid and you absolutely have to stay hydrated. The student Union is conveniently located just north of the stadium. This made it incredibly easy to go in and have lunch and sit in the cool air conditioning, of course after removing my hat upon entering the building. That’s right, out of respect to fallen veterans, hats are removed upon entering the student union.

The inside of the stadium is enormous. The announced attendance for the game was 100,001. There may have been 1500 empty seats but still a ton of people. Candidly, where we sat was so high that it was tough to feel the vibe of the game. Part of that might have been that Auburn’s stingy defense led by one of the best D-lines in the country forced A&M to entirely abandon the run. The Aggies were too one dimensional and could not get a sustained passing attack going.

The football outcome aside, another site that blew me away was the Cadet Band. When halftime hit, I was practically down the aisle on my way to the concessions when my brother-in-law told me to sit down. I was taken back but figured I should heed his direction. The band rolls out onto the field and captivates the crowd with military themed music, all while executing the most intricate marching maneuvers. They cut and wove in and out of their lines with amazing precision. I swear 90% of the people stayed in their seats till it was done. And then the fans go nuts with applause. It was quite a spectacle.

College football simply goes off in the South. Saturday at A&M was no different. South Carolina probably has a more unique tail gate scene and Tennessee’s stadium with 93,000 the day I was there was probably a bit louder, but the overall scene at A&M takes the cake. It was extremely impressive. In addition to the facilities and the surroundings, Texas charm and hospitality were on full display from the fans. Aggie fans could not have been nicer to the Auburn fans and to me and my son when I mentioned we were from Utah. I would recommend a weekend trip to College Station for any die-hard college football fan.

Thoughts on BYU heading into the Washington Game
Takeaways From the Aggies 23-17 Victory Over San Diego St. Saturday Night