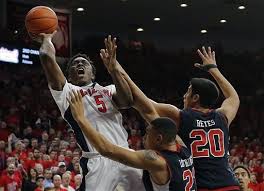 The #8 Utah Utes were beaten handily by #10 Arizona on Saturday 76-59. It was billed as a top 10 showdown but did not live up to the hype. Utah never got going on offense and seemed overmatched by Arizona’s height and length. Delon Wright did not play well and the Utes didn’t seem to have anyone else willing to answer the bell.

I thought this might be a nice showcase game for Utah’s 7 footer, Jacob Poeltl – who is receiving a lot of NBA draft buzz. Arizona is loaded with NBA caliber big men and it would have been nice to see Potl hold his own. He was kind of a non-factor. Poelt had his normal 6 points in the game but was just not a force.

Besides this bad loss, the only negative thing I have to say about Larry Krystkowiak this season is Utah doesn’t feature Poeltl enough in their offense. I think they could go more deliberately into the post with him and develop his offensive game, while helping the team score.

Though I don’t think Arizona is 20 points better than Utah, the Utes certainly have some room to improve after this bad loss. I think they will be fine and I expect a much closer game when Arizona visits the Huntsman Center.

Matthew Piper of the Salt Lake Tribune see it the same way: Utah basketball: No. 12 Utes will not drastically alter approach after Arizona ‘beatdown’

One word of caution though with the Utes – they have now played 4 ranked teams this year. They are 1-3 in those games. I still think they are fine as they have steamrolled the rest of the Pac-12. It will be very interesting to see how they bounce back against Washington State on Wednesday night at home.