Nothing Says Irrelevant More Than a Monday 2:00 pm Bowl Game 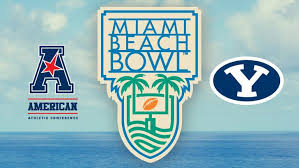 Nothing Says Irrelevant More Than a Monday 2:00 pm Bowl Game

From 2005-2009, BYU played in the Las Vegas bowl every year. I remember the fan base grumbling a bit (myself included) that the game was getting kind of tired and BYU deserved better. Well, fast forward to independence and 2014 and I dare say BYU has not played in a bowl as good as the Vegas Bowl since then.

Five  straight trips to the Las Vegas Bowl doesn’t seem quite so bad for BYU these days. Especially when you compare it to what will take place today at 2:00 Eastern – the innagural Miami Beach Bowl with BYU vs. Memphis. Nothings screams irrelevance more than playing at 2:00 eastern on a Monday. It’s not like it’s Christmas Eve or anything like that. Yes, most kids are out of school already for Christmas break  but today and tomorrow are still very much normal work days.

It’s just a bad draw for BYU. Athletic Director Tom Holmoe is doing all he can to secure bowl games without having a conference tie-in. This game just isn’t good for BYU and its fan base. BYU is a lackluster 8-4. Memphis is an absolute no-name when it comes to football (though they have a nice team this year). The game is clear across the country. Not to mention, it’s way down in Miami. There won’t be a lot of local LDS members in attendance that you normally get at BYU road games. Had the Cougs been playing further north in Florida, they maybe would have attracted more fans from the Atlanta or Charlotte areas, maybe had some families combo the game with a trip to Disney World, etc.

All that said, the game might actually be entertaining. It should be a good match-up. Memphis is favored  by 2 points. Some are calling this the “play-in” game to the Big-12 conference as both schools have been rumored to be candidates for Big-12 conference inclusion. Unfortunately, most of that talk has died down and any chatter is probably only being driven by the wishful schools.