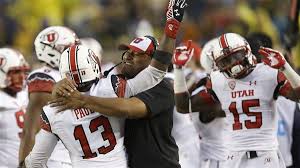 In week 4 the Utes came off of a bye week to battle Michigan in Ann Arbor. After an unusual weather delay the Utes came away with the win and an impressive team showing.

DEFENSE: I think the defense stole the show. They were impressive throughout the game and I would describe their effort in three words; Stout, Prepared, and Aggressive. At one point in the first quarter one of Utah’s line backers was moving toward the direction of the play before the running back received the ball. That showed excellent preparation, kudos to coach Sitake on having his guys prepared for a tough match up. Aside from their preparation the D looked aggressive on every play and made some huge hits, forcing a number of drops from Michigan. The secondary played well. In spite of giving up a few big plays, when Michigan was able to find a few soft spots in their zone, the secondary was able to get the take aways. Their level of play reminded me of some of the great defenses in great past. Standing out on D: Jared Norris, he played aggressive and was involved on many tackles.

OFFENSE: The offense looked good but struggled at times with the run. Travis Wilson made some quick reads, taking advantage of soft coverage on the corners, and completing some quick throws to move the chains. I think this offense should suit the team well in the PAC 12. They had a great screen play early in the first quarter that could have gone to the house (in the big house)… hold up and use your blockers, or make a move to three inside. The only concern I have is with the option play under K Thompson. The defensive end was able to take away the RB option and still get to the quarterback. If one defender can disrupt the option there is no point in running it. If they want to run the option with Thompson I’d like to see them run it out of a deferment formation. The spread option play from shotgun is an easy read unless you are throwing the ball to keep the D honest. Travis did better at running the option in the second half after they had established the pass.

Stand out on Offense: Travis Wilson, Travis played well, protected the ball, and came back after taking a big hit in the second quarter (stay on the ground Travis).