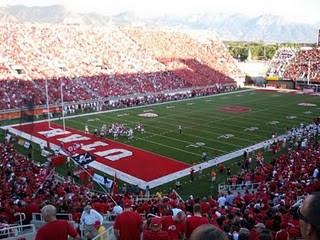 I work with several guys who grew up in the South, still live there, attended SEC schools, and are absolute football fanatics.

They like to tell me there are 3 seasons in that part of the country – Football season, recruiting season and spring football.

We certainly like our football out west, just not quite to that extent. However, college basketball is now officially over in the state of Utah and if you’re jonesin’ for some college football already – here are links to the latest from spring practice at BYU and Utah:

As well, here are links to BYU and Utah’s schedule this year from www.fbschedules.com,  a great site that lists all the Division 1 football schedules several years out.

As discussed previously here on www.purple.mountainhaze.com, BYU has a brutal road schedule this year:

At Notre Dame, at Boise State, at Utah, at Georgia Tech.

What they also have this year is the same horrific November schedule. BYU has a bye the first week in November and then plays in succession: Idaho, San Jose State and New Mexico State to finish out the season. This moves them totally off the national radar for the last month, regardless of how they perform in September and October. This is certainly one of the challenges of Football Independence and I don’t see it going away anytime soon for BYU.

The first thing that jumps out is Utah gets USC at home this year.

As well, Utah avoids Oregon and Stanford again. Stanford won’t be nearly as good with Andrew Luck moving on but Oregon should be neck and neck with SC as the PAC-12 front runner. Remember, with the new Pac-12, you play 5 divisional games every year and then 4 of the 6 teams from the other division. Utah’s opponents from the North division are the same as last year. They will just swap sites. Avoiding Oregon and getting SC at home certainly plays into Utah’s favor. We’ll see how things shape up as we approach the fall.